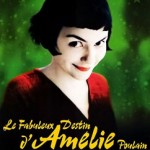 ‘Amélie‘ is one of those movies we love here at Museyon — sweet, iconic and visually stunning. We also love the picture it paints of gay ol’ Paris. Of all the Gallic cities, none is more stereotypically French than Paris, writes Julien Sévéon in Film + Travel, which is why it’s long been a favorite of tourists and filmmakers alike. Let’s take a look, shall we…

In the film, pluckish Amélie Poulain lives in Paris’ Montmartre — the neighborhood that was once a bohemian haven for the likes of Dalí, Renoir, Monet, Picasso, Van Gogh and Jean-Pierre Jeunet, the film’s director. To begin your trip head to the right bank, and the 18th arrondissement. Fans of the film should be forewarned, though, the neighborhood is a little more modern than the ‘Amélie’ suggests.

To get a sense of the city, head to the Basilica of the Sacré Coeur, where you’ll still find sweeping (and stunning) views of Paris. After all, the Roman Catholic basilica is located at the highest point in town.

Paris will always be a city for foodies, and the Montmartre of ‘Amélie’ does not disappoint. In fact, you’ll find the very grocery and cafe from the film. Start the day with an espresso at the Café des 2 Moulins (15 rue Lepic), where the matchmaking Amélie works as a waitress. Or, take a cue from the film’s heroine and crack open a crème brûlée.

Want to discover more  about France in film? In ‘Film + Travel’ Julien Sévéon is your guide to Paris — plus the rest of France and Bruges, Belgium, too.