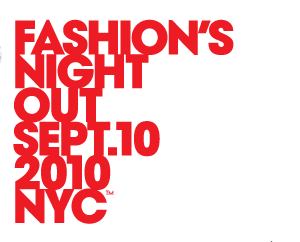 Do you obsess over Project Runway and model your wardrobe over Rachel Zoe? Then get ready for Fashion’s Night Out on September 10th. Happening in cities across the world, the epicenter of celebration will of course be New York City where there will be block parties like the Teen Vogue Block Party sponsored by ASOS and will include a full fashion show and live performance by VV Brown and exhibitions such as the Indigo Light: a collection of portraits by Claiborne Swanson Frank taking place at the Akris boutique.

Another special event taking place on Fashion’s Night Out is the displaying of hand-sewn, hand-painted rag-dolls of Vogue Editors Anna Wintour and Grace Coddington. Barneys New York commissioned the dolls from Brooklyn-based artist Andrew Yang who says about his creations “I had to special-order Anna’s wig and cut it myself to get the bob right, and Grace’s hair was the right color, but it needed a perm. The outfits are my own take on their signature looks, it would have been unfair to single out specific designers.” Anna and Grace will be auctioned off on charitybuzz.com beginning August 31, with the proceeds benefiting The New York City Aids Fund.

Previous: Chronicles: Merchant’s House
Next: Museyon’s Guide to the Weekend