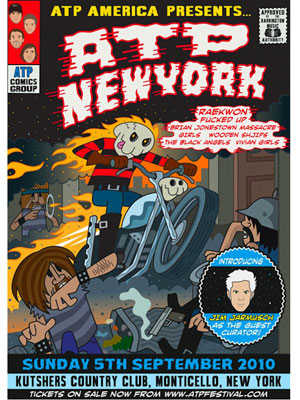 Just a few weeks back, we alerted you to the fact that Simpsons creator and, evidently, indie-music geek Matt Groening would be curating the yearly All Tomorrow’s Parties in England for a second time this May. Well the curator of the September 5th Sunday shows at the upstate New York branch of the festival has just been announced and it’s yet another of our heroes from the world of motion pictures, filmmaker Jim Jarmusch. Anyone who knows the director or his work well understand how close the origins of his career were tied to the indie music scene of the early 1980s and how, as it has gown, how he has created links with current emerging bands and the world of hip-hop. The lineup, which currently includes Sonic Youth, Fuck Buttons, Mudhoney, The Breeders, The Brian Jonestown Massacre, The Black Angels, Fucked Up, Raekwon, and Vivian Girls reflects the experience and taste of a man who hung with No Wavers, casts Wu-Tang members in his films, and continues to keep his well-trained ear to the ground. Keep checking www.atpfestival.com for more listings and info.

For a whole world of festivals featuring every kind of music under the sky, pick up our “Music + Travel” guidebook.

Previous: Travel From New York’s SoHo to African Sahara This Weekend With “Barefoot to Timbuktu”
Next: Scorsese, DeNiro to Create New “Taxi Driver” With Von Trier?