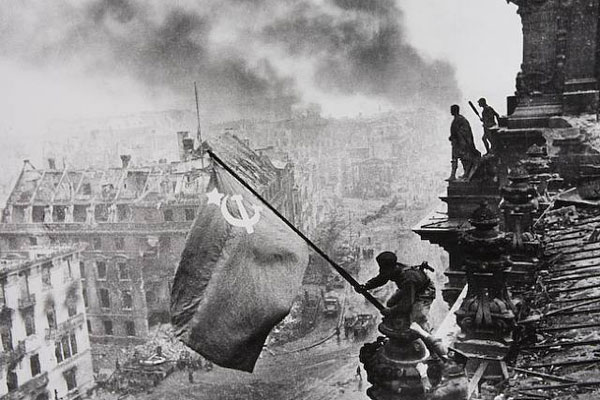 Abdulkhakim Ismailov, the Red Army solider who at the age of 28 was photographed unfurling a Hammer and Sickle atop the Reichstag during the climax of the Soviet siege of Berlin in 1945, died in his Russian hometown this week at the age of 93. The flag was made of tablecloths and the moment was staged, but Yevgeny Khaldei’s photograph justly remains the most iconic image of what Russians rightly call “The Great Patriotic War”. (Guardian UK)

Historians are banding together to protest the spurious plot points of an upcoming J.F.K. miniseries. (Animal)

For the movie fan with cash to burn and an empty house—a service lets you buy props, furniture, and other interior design elements from your favorite films. (Cinematical)

Drrrty Soth rapper and convicted felon facing jail Lil’ Wayne can’t sell his Miami house because it stinks too much of weed. When it rains, it pours, hunh Wheezy? (Vulture)

Have you ever wondered what would have happened if the late Edward Gorey had illustrated Star Trek’s “The Trouble With Tribbles”? Wonder no more. (Urlesque)

London’s Ministry of Sound is fighting to maintain control of the flagship club space that has been its home for 18 years. (NME)

Previous: Gauguin Takes Up Residence in Van Gogh Museum for “Breakthrough Into Modernity”
Next: Lloyd-Webber and Others Look To Adopt Abbey Road Studios