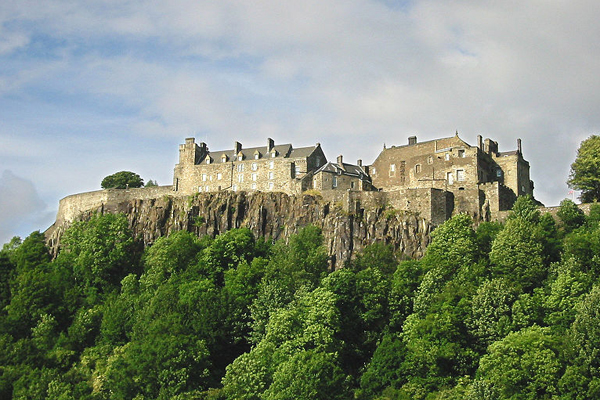 Known as the ‘Gateway to the Highlands,’ Stirling has been an important part of Scottish history since Roman times due to it’s location at the base of the Scottish hills and its defensible crag and tail hill.

The city today is best remembered for its strategic importance in the Wars of Scottish Independence which involved freedom fighters William Wallace and Robert the Bruce, immortalized in the film Braveheart. One of the major sites associated with the battles is the Stirling Old Bridge, where William Wallace defeated the English. The bridge isn’t the original wood bridge that stood at the location, but it still gives visitors an idea of how it looked. Another monument to William Wallace is the National Wallace Monument, a Victorian Gothic tower. The tower sits high above the city on a volcanic craig and inside are several artifacts associated with Wallace, most notably the Wallace Sword, a 5 ft, 6 in long claymore.

The main attraction of Stirling though is the castle, looming over the city. The main buildings of Stirling Castle were completed in the fifteenth and sixteenth centuries with a few structures of the fourteenth century remaining and the outer defences fronting the town date from the early eighteenth century. It is thought that because of its great fortified location, Castle Hill was used well before the fourteenth century, through the time of the Romans; it has even been associated with the legend of King Arthur. The castle was most recently in the upcoming film Burke and Hare, the real-life 19th century grave robbers who find a lucrative business providing cadavers for an Edinburgh medical school but when supplies dry-up, make their own.

Another castle close-by that will be more recognizable to those who haven’t grown-up in Scotland is Doune Castle. Doune is a fourteenth century stronghold that is often used as a medieval location in films; the list includes Ivanhoe, Elizabeth: The Golden Age and most famously, Monty Python and the Holy Grail.

Access: The closest major airport to Stirling is Edinburgh, 29 miles away. From Glasgow and Edinburgh there are multiple buses which run hourly and both take about an hour. The trains depart every 30 mins and take half the time but will likely cost you twice as much depending on when you book.
braveheart extended travel king arthur Scotland stirling 2010-08-23
Kellas