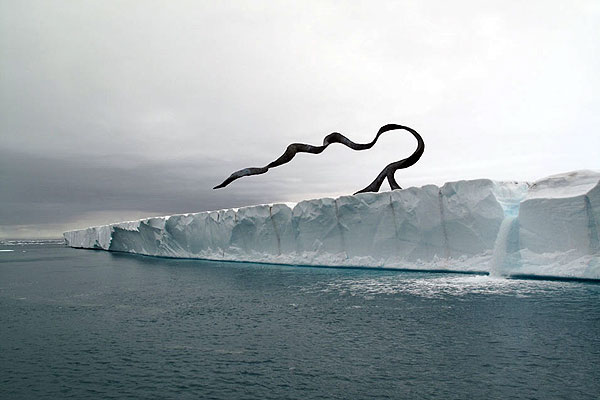 Through our travel guides on art, music and film, we encourage you to personally engage great paintings, rare sounds and unforgettable movie locations using your eyes, your passport and your feet. But a new, near monumental piece of sculpture created by Dutch artist Ap Verheggen isn’t something we suggest you see up close, unless you’re the captain of an icebreaker.

Choosing Greenland as his location, Verheggen has created a giant ripple of metal rising off a free-floating iceberg off the island nation’s west coast. As colossal as daunting a the work is, it’s far from permanent—the southbound frozen platform will soon melt, sending Verhaggen’s composition down to Davey Jones’ locker. But before you get all up in arms about the pollution of our endangered oceans by careless Danish creatives, know that this doomed piece is but one of a series of outlandish public artworks Verhaggen has created to raise awareness of environmental issues. Meant to represent a dog-sled driver (note the curling whip) the sculpture’s sojourn, which could last up to two years, is a microcosm of Verheggen’s views on global warming (we’re all going to drown—get it?) Verheggen tells Artsdaily.org, “Usually it is the driver who determines when the journey begins, where it goes, and when it is over. By placing the dogsled driver on an iceberg, we show that nature ultimately determines the course of the journey.” Eloquent as that is, the achievement of actually completing the project and sending it on its long, eventually fatal course is something special in of itself. With other projects funded by the World Wildlife Fund to appear in similarly threatened icy habitats (Canada, Siberia), we’re looking forward to Verhaggen’s next Artic artwork.

For more information on this project and live webcam views of the sculpture, go to www.coolemotion.org