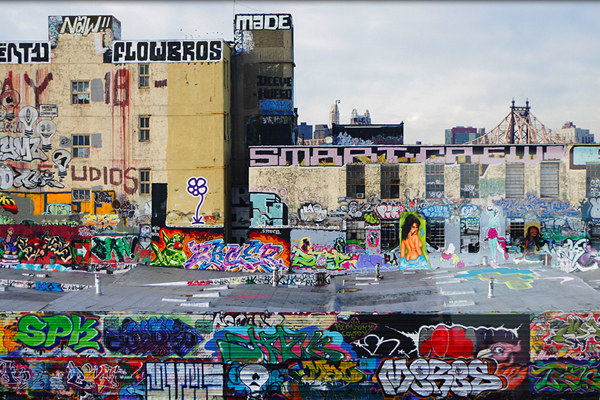 Every year that Project Runway takes place in New York, there is a challenge where the designers must go out into the streets and take photos to be inspired by and every year at least one of the designers comes back with a stack of photos of graffiti art because “graffiti is so New York.” Despite the cliche, yes, graffiti as we know it today did begin in New York City in the late 1960s and became a popular movement alongside hip-hop in the 1980s. Since then, graffiti has become known as more than just “tagging,” it has become an art-form in its own right with exhibitions around the world including an early show in 1996 at the Museum of the City of New York.


Perhaps the most well-known graffiti artist working today is Banksy, a mysterious figure whose art is just as likely to pop-up in Paris as it is in London, New York, L.A. or the Gaza Strip. New Yorkers might recall Banksy’s immense rat on the corner of Grand and Wooster, his pop-up “Pet Shop” featuring animatronic animals or his 2005 feat up putting up his own artwork aside famous works in the city’s biggests museums. Earlier this year, Banksy surprised attendees at the Sundance Film Festival with a new self-directed film about his work and the life of his would-be documentarian Guetta called Exit Through the Gift Shop. The film is getting rave reviews and this weekend New Yorkers were treated to a free screening at Brooklyn’s Knitting Factory. Check out the trailer below.

Want to see New York graffiti for yourself?

On the web:
BLUEJAKE by Gothamist publisher and graffiti aficinado Jake Dobkin.

The History of Hip-hop Graffiti

Previous: Music + Travel… On a Boat?
Next: News: McDonalds + Cupcakes?