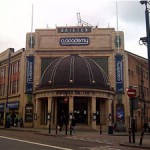 Though technically entitled the “O2 Academy, Brixton,” the building which houses the famous Brixton Academy in London was once the location of a bustling film house, The Astoria. Built in 1929, The Astoria saw many film premieres and the BBC would occasionally broadcast live acts playing The Astoria stage. In 1972, the theater closed but later that year reopened as ... END_OF_DOCUMENT_TOKEN_TO_BE_REPLACED