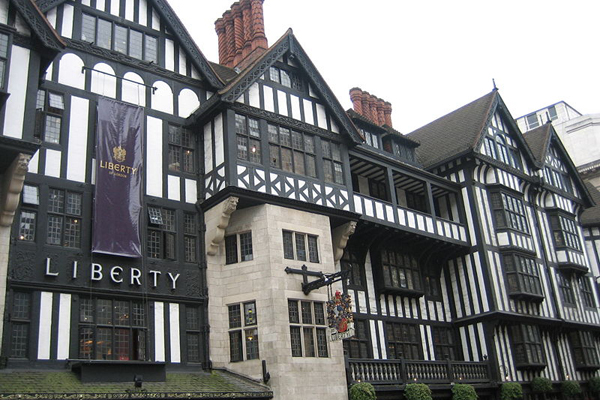 What was started by visionary Arthur Lasenby Liberty in 1874 with only a £2,000 loan from his father-in-law has since surfaced to become one of the most iconic British brands, Liberty & Co.

When Liberty opened his first store, he was convinced that he could change the look of homewares and fashion by carrying brightly colored ornaments, fabric and objets d’art from Japan and the East. Quickly, the store became the most fashionable place to shop in London and iconic Liberty fabrics were used for both clothing and furnishings. Its clientele was exotic and included famous members of the Pre-Raphaelite movement who took inspiration from the East for their works.

It was not until 1924 that the iconic flagship, ‘Tudor,’ building was erected on Great Marlborough Street. The structure, which now graces many a London postcard, was constructed from the timbers of two ships: HMS Impregnable and HMS Hindustan. The frontage at Great Marlborough Street is the same length as the Hindustan and it is a Grade II* listed building. The shop was engineered around three light wells that formed the main focus of the building. Arthur Liberty wanted to create the feeling that you were walking around your own home when you came to his store, so each of these wells was surrounded by smaller rooms to create a homely feel. Many of the rooms had fireplaces and some still exist today. The wells created a wonderful environment in which to drape exotic rugs and quilts, whilst the smaller rooms allowed the display of smaller items.

Nowadays, Liberty as stretched their reach around the globe with a shop in Japan, an online market and their line of Liberty fabric inspired clothing and home furnishings at Target.