Munch in 3D: Cardboard Copy of “The Scream” Adds Depth to Existential Agnst 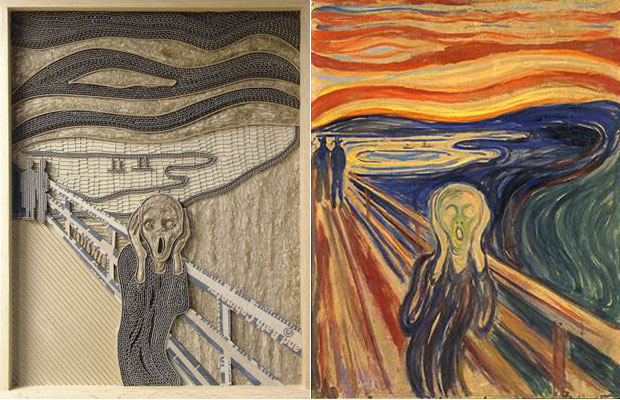 Seeing as the series of works known collective as “The Scream” is one of the world’s most iconic images, humanity can be forgiven for trouping and transforming the famously blood-curdling Edvard Munch masterpiece into dolls, goofy Simpsons posters, and even more cultural flotsam that the ever-troubled, often-bilious Scandinavian artist would have almost certainly hated with a vengeance. But it’s far harder to imagine what the dyspeptic Swede would have thought of American target=”_blank”Mark Langan’s cardboard tribute to the artwork that has become a widely revered, sometimes comic banner for 20th-Century existential dread.

Brought to our attention by an article in England’s Telegraph, no one can second guess Langan’s dedication and craftsmanship, two of the few characteristics the highly discriminating Munch actually celebrated. Langan spent over 90 hours carving up 30 square feet of cardboard to created his finely detailed, 3-dimensional take on the 1910 version of Munch’s familiar painting. However, when the work sold for £1,600 last year, it fell into the purview of the Munch Museum and estates, a highly litigious organization that, while licensing blow-up versions of “The Scream”, also seems to guard the modern master’s oeuvre with fanaticism. No legal action has been taken, but if you ask us, we think the best place for Langan’s ode to recycling and the modern environmental crisis belongs at the Oslo museum alongside all the various, less tasteful uses of Munch’s iconic screamer in their own permanent exhibition. Just a thought.

To see the real “Scream” for yourself and delve deep into the dark world of Edvard Munch, pick up a copy of our recently released “ART + TRAVEL EUROPE: Step into the Lives of Five Famous Painters” which features a detailed tour of his native Oslo including the must-see highlights of the Munch Museum.