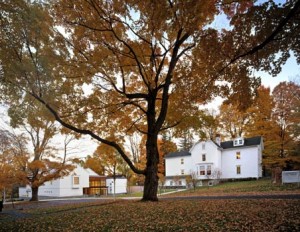 Just 56 miles from New York City is Ridgefield, Connecticut, nestled into the foothills of the Berkshire Mountains. A quaint town with a 300 year history that reaches back to English colonialists in 1708, the center is an historic district with representations of late Victorian and Colonial revival architecture. In 1777, a battler between the American colonists and the British took place in Ridgefield, during which Benedict Arnold’s horse was shot from underneath him. The Keeler Tavern, a local inn and museum, features a British cannonball still lodged in the side of the building. 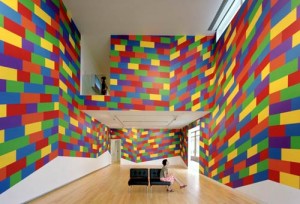 Among the many historic landmarks of Ridgefield is the Aldrich Contemporary Art Museum. The museum was founded in 1964 as both an exhibition and alternative art space by fashion designer and art collector Larry Aldrich, who was both a great collector of Impressionists and contemporary artists. This building housing the collection was constructed in 1783 by Joshua King and James Dole, two lieutenants in the Revolutionary War, and was nicknamed “Old Hundred” because it served as a grocery and hardware store from 1783 to 1883 and as Ridgefield’s first post office.

The museum does not own a permanent collection, therefore presents several shows each year by emerging and midcareer artists. The Aldrich also has a screening room, a 100 person performance space and a two acre sculpture garden.

Previous: Thanks for Visiting Us at BEA!
Next: News: Up Close with Van Gogh