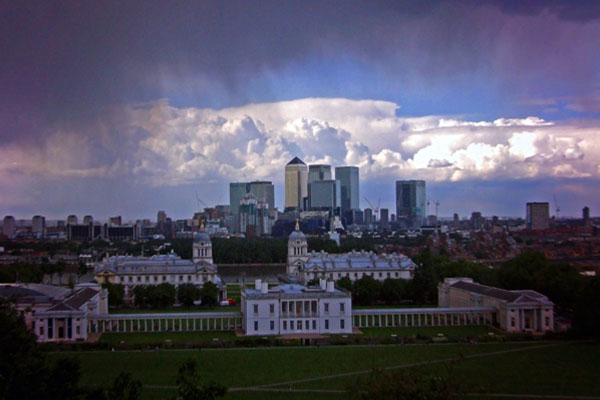 One of the most popular filming locations in London is the UNESCO Heritage Site of Greenwich. Greenwich is a borough of London but really, it is a small town unto itself, located six miles up the River Thames.

Once the home of English royalty, Greenwich has a history that reaches back through Roman times to the pre-historic, with ancient barrow (or burial) mounds still visible. Greenwich is perhaps best known though for being the symbolic home of Greenwich Mean Time, it is here where the Prime Meridian passes through London and for which the time denomination was named.

Greenwich is home to the picturesque University of Greenwich (above), at which Eastern Promises, The Duchess, Gulliver’s Travels and The Mummy Returns were filmed. The university also encompasses the Old Royal Naval College, which was built by Christopher Wren in 1694.

Other popular attractions in Greenwich include The Royal Observatory, Flamsteed House (In middle of Greenwich Park). This is the home of Greenwich Mean Time and the Prime Meridian line and is one of the most important historic scientific sites in the world. It was founded by Charles II in 1675 and is, by international decree, the official starting point for each new day, year and millennium (at the stroke of midnight GMT as measured from the Prime Meridian). Also The National Maritime Museum, which contains the UK’s national collection of Martime artifacts. One of the buildings housing the museum is the Queens House, built by Inigo Jones and the first Palladian building in England.
greenwich London 2010-09-27
Kellas

Previous: News: Van Gogh Theft, An Inside Job
Next: News: Gauguin at the Tate Modern