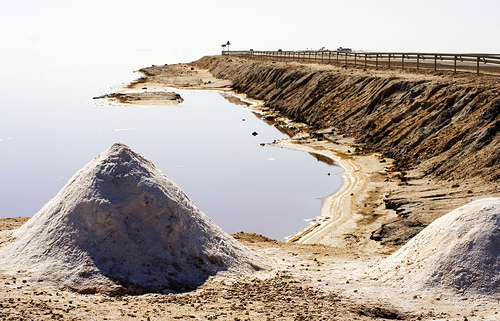 Q: This location may have played “a long time ago, in a galaxy far, far away,” but it’s actually a salt lake, one that dries up almost completely during the annual dry season. It starred in a massively famous film — can you recognize this all-time classic? Bonus points if you can locate, where on earth you’ll find this very extraterrestrial landscape. Answer, and an on-location clip, after the jump…

A. The lake is Chott al Jerid, a massive salt flat in Tunisia, near the boarder with Algeria. It got its star turn in ‘Star Wards (A New Hope),’ George Lucas’ 1977 smash hit.

In Museyon’s Film + Travel, Lee Middleton is your guide to Tunisia. Follow her on a ‘Star Wars’ pilgrimage and find out where Luke Skywalker gazes into the binary sunset, and then see the sites where George Lucas returned to Tunisia more than 20 years later to film 1999’s ‘The Phantom Menace.’

Previous: Bastards Before Basterds
Next: This Just In: Nightly Noir