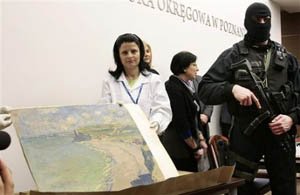 In September of 2000, a broken and despondent man found solace in the work of Impressionist artist Monet. “My life was empty and without meaning,” he said. “I escaped into books. In one of them I read about the Monet…”

The Monet he read about was Beach at Pourville at the National Museum in Poznan, Poland. Armed with nothing but a sketchbook, a sharpened blade and a dream, Robert Zwolinski travelled to Pozan. “I decided to go to Poznan to see it for myself…not a day went by that I was not thinking about it.”

After receiving permission from the museum to sketch the work, Robert sat down in front of the painting and over the course of five hours, slowly sketched and gradually, inch by inch, cut the Monet away from the frame with his blade. In the low security museum, the paintings were not armed and neither were the little old ladies who sat chatting in another room. Robert would listen to their heels click on the marble flooring, announcing their return to the room in enough time for him to regain his seated position in front of the work, pencil in hand. 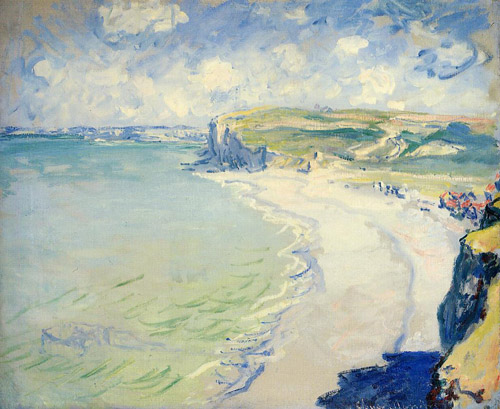 Once the painting was cut loose, Robert quickly stashed it inside his briefcase and replaced it with a poor copy. It wasn’t until long after he fled the scene that a guard noticed the real work was gone.

Now in possession of the work that had been haunting him for so long, Robert didn’t know what to do. In a panic, he stashed the painting behind a wardrobe in this parent’s apartment and for the past ten years, that is where it has remained. He never took it out.

Wracked with guilt, twice Robert tried to turn himself in but each time his courage failed him. In January of this year, Robert’s finger prints were taken after he failed to make maintenance payments and it didn’t matter anymore if he had the courage, he had inadvertently given himself up. His finger prints were matched to prints taken off the Monet frame and a ten year old mystery was finally solved. Robert will spend three years in prison and the Monet has been released, a little worse for wear but currently back on display in Poznan.