Home » Blog » Munchin’ in Memphis at The Arcade

Munchin’ in Memphis at The Arcade 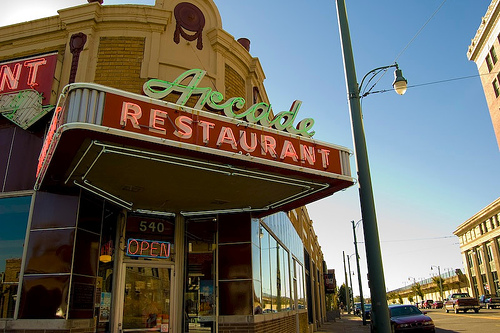 Feelin’ hungry for some stick-to-your-bones Southern grub? Then step on down to Arcade Restaurant, located in the heart of Memphis’ historic South Main District at the corner of South Main and Calhoun Avenue. It’s the oldest restaurant in Memphis, and a city landmark, so it should come as no surprise that the Arcade has appeared in its fair share of Memphis movies — from ‘The Client‘ to ‘Walk the Line‘. Click for more…

Built in 1919, but refurbished in the 50s, the old-school diner also makes a cameo on the cover of Jim Jarmusch’s 1989 film ‘Mystery Train‘, which features scenes shot at the Arcade. And the restaurant where Norah Jones slings coffee in Wong Kar-wai’s ‘My Blueberry Nights‘? The Arcade. Again. Feel like a drink after dinner? Then head around the corner to another Memphis favorite, Earnestine & Hazel’s. The neighboring bar is Jones’ character works the night shift in ‘My Blueberry Nights.’