Home » Blog » The Scene In Six Sounds: The Blogosphere

The Scene In Six Sounds: The Blogosphere 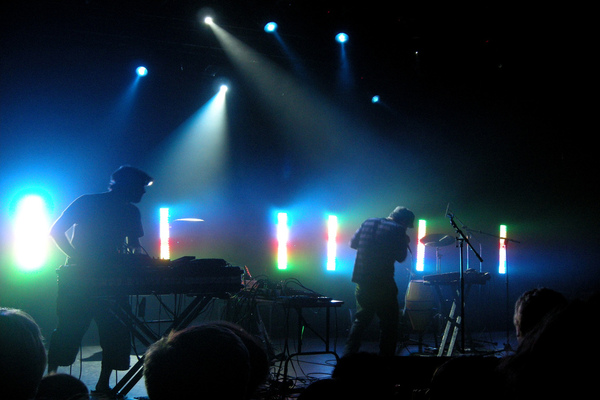 From the vicious spiel of celebrity blogging stars like Perez Hilton to the underground waves produced by those touting the latest in lovable indie starlets, there’s no doubting that these days, popular blogs and their musical tastes can be considered a scene. Not only are record labels happily shipping album after album to the more popular pontificators in the hope that their band will get a behind-the-scenes kick start, but bloggers themselves have a great ‘ear to the ground’ mentality, and have pushed acts like Arcade Fire, MGMT and Vampire Weekend to heights they otherwise might have struggled to reach. Here’s what they’re raving about these days, our James Hendicott reports.

Animal Collective: Okay, so Animal Collective can hardly be described as the most underground of acts, but their ongoing gentle shove into the mainstream music lovers conscious is largely of the back of the incredible Merriweather Post Pavilion album, a slow builder that landed at the top end of more ‘album of the year’ and ‘album of the decade’ lists than anyone could have predicted. Bordering on ambient, but with a bizarre psychedelic twist, with added oddity thrown in by the band’s use of animal personas.

And So I Watch You From Afar: A totally opposite extreme to the chilled out vibes of Animal Collective, And So I Watch You From Afar are a loud, paranoid, vocal-less guitar act from Belfast. Widely touted by bloggers as the next Mogwai, ASIWYFA are significantly more lairy than the Glaswegians, and pepper their interviews with comments on communism, video surveillance, big brother and what it’s like to drive an ex-police van through sectarian Ulster. Which already makes them one of the most interesting bands you’re ever likely to come across, and that’s before you get stuck into their expressive first album and chaotic live show.

Grizzly Bear: Grizzly Bear’s hugely critically acclaimed album Veckatimest somehow missed out of grabbing the hearts of the public as much as it grabbed the ears of critics, with sales figures falling far below what reviews would have us expect. Nevertheless, Veckatimest’s subtle style of folk rock inundated with weird twists and experimental leanings. Grizzly Bear impressed label Warp Records so much, the executive made the Brooklyn lads the only non-electronic act on the label.

Marina and the Diamonds: Despite not having released an album just yet, you could almost count Marina and her mythical Diamonds amongst mainstream pop acts in the UK already, with the half Welsh, half Greek starlet grabbing so much popular press she’s a virtual shoe in for a smash hit career. Museyon have been luck enough to grab a copy of her album in advance of its release, and its witty, celebrity-bashing brand of alternative pop is certain to be one of the most infectious records you’ll hear this year. Think angsty yet self-confident power pop with more hooks than coat stand.


Two Door Cinema Club: Another Northern Irish star that’s slowly rising on the European music scene, electro rockers Two Door Cinema Club tout the indomitable Death Cab For Cutie and Bloc Party as their main influences. Oddly enough – particularly for a group now touted as the epitome of cool – Two Door Cinema Club first met at boy scouts, and have won a contract with the heavily acclaimed electro label Kitsune music, leading to tours with another ‘future star’, Delphic. The debut album ‘Tourist History’ is due out on the first day of March this year.

Tune in next week, same time, same place, for a new local playlist from James Hendicott, your guide to Celtic punk in Museyon’s Music + Travel Worldwide. To read more of his musings on music and other topics visit hendicottwriting.com.