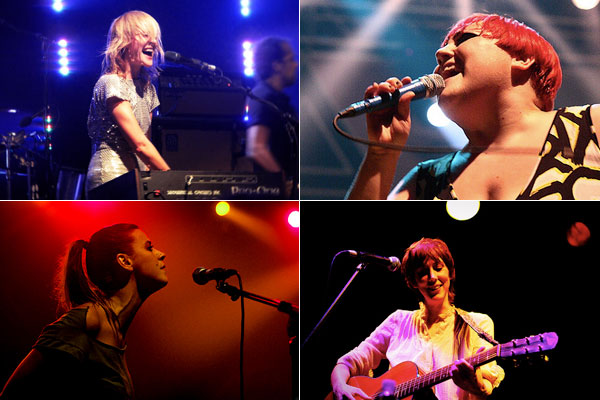 It was 1999 the last we saw hide or hair of The Lilith Fair—that estrogen-heavy touring festival created by Canadian balladress and hacky sack champ, Sarah McLaughlin. Back then, a solid day of heartfelt, acoustic, overly literal tunes was still a marketable concept—Ani DiFranco was still huge, “Ally McBeal” was one of the top shows on television, and popular music was clearly divided between pointlessly masculine rap/rock and more sentimental fair. In the intervening decade, mainstream music and female identity has shattered—in no small part thanks to the internet. We’re in a post-Peaches age, and, in a bid to remain relevant and profitable, a newly relaunched Lilith Fair has returned with a smaller roster of artists and a few acts that actually, wouldyoubelieveit, rock.

While regulars from the first three years of the fest are returning (Indigo Girls, Beth Orton [above lower left], Emmylou Harris, and McLaughlin herself), the Fair has cut its total bill by over half, a nod to the economic realities of touring and promoting these days. Simply, fans are no longer interested in dealing with 40 or so artists, as Lilith offered in the late ’90s. More carefully edited events like All Points West and All Tomorrow’s Parties have proven effective vehicles even if they don’t reach the heights of excess of Cochella and Bonnaroo. As well, where the old Lilth looked to acts like Bif Naked and Juliana Hatfield to add oomph on the second stage, this time McLaughlin is letting more rough-and-tumble fare like The Gossip (above, upper right), Tegan and Sara, Metric (above, upper left), and Cat Power (above, lower left) bring their more contemporary, hipster-baiting music front and center. A tighter lineup also serves to emphasize the differences in the acts, while the old formula reinforced Lilith’s status as a singer/songwriter grab bag. While Sheryl Crow is mysteriously still part of the lineup, this is actually a roster represents what women in music are doing at this moment instead of forwarding the somewhat wimpy sisterhood seance that was the The Fair’s first incarnation. As if to underline this, McLaughlin has brought on ’70s rock gods Heart who will no doubt wake up the audience with their riff-fueled dramatics after a sleepy afternoon of Norah Jones tunes.

For dates and more information go to www.lilithfair.com. For more music festivals to keep you dancing in the sun all summer long, pick up “Music + Travel Worldwide”.