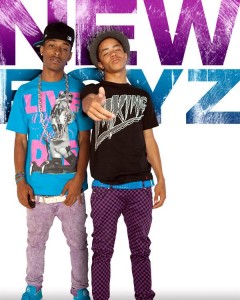 They may only be 17, but the New Boyz are leading the latest wave of the West Coast sound. The Los Angeles-based duo of Ben J and Legacy hit it big with “You’re a Jerk,” an ode to jerkin’ dance craze that’s taken over the city’s teen scene. Steeped in laid-back party beats and styled with Day-Glo ’80s and ’90s fashion, jerk is the city’s sunny counterpoint to San Francisco’s high-energy hyphy sound and the South’s dirty crunk beats.

The New Boyz recently hit the studio with DJ and superproducer Diplo to record their debut album, ‘Skinny Jeans and a Mic,’ which drops tomorrow. If you need to practice your moves before heading to the club, check out “Teach Me How to Jerk” by LA rappers Audio Push.

Previous: A Ride on the ‘Darjeeling Limited’
Next: Museyon Takes BK