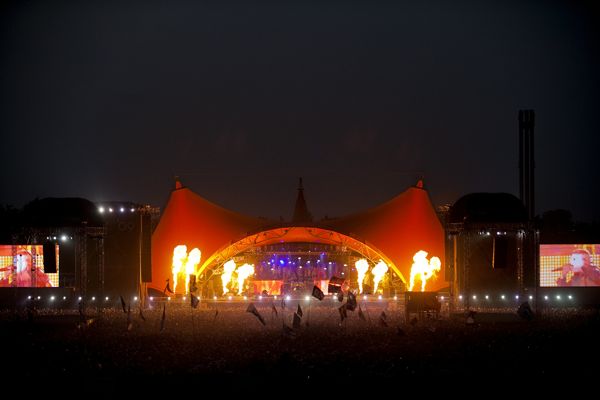 Oh, how we love Denmark.  Where else besides the multi-day Roskilde Festival can you experience some of the biggest names in music and its notable up-and-comers, skate on half-pipes, go fishing, take a dip, post some mail, fill your prescriptions, shop for groceries, do your laundry, and have your electric car battery recharged alongside 100,000 like-minded fans?  Plus, because it is run by the non-profit Roskilde Festival Charity Society, all the Festival’s proceeds go toward humanitarian and cultural causes.

OK, so four-day tickets run about $450.  But again, it’s in Scandinavia.  And there’s free luggage storage!

Located 35km outside of Copenhagen on 80 hectares of land, the music and arts festival is the largest in northern Europe–bigger than Glastonbury (which is held the week before).  Roskilde kicks off this year on July 1st with acts ranging from rock, R&B, electronica, hip-hop, pop and soul.  Although the official show does not start until that date, the grounds open the last Sunday in June to allow camping revelers to settle in and pre-party during the festival’s “warm up” sessions (this year beginning on June 27th). 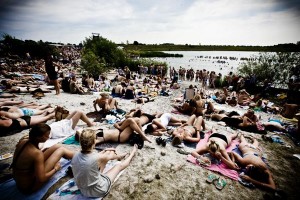 In recent years, thousands have spent the lead-in days queuing up for the best camping spots, turning the line into a festival unto itself.  We therefore recommend you get there at least a week in advance for maximum fun.

Details about this well-organized event, including transportation and purchasing four-day tickets or day-passes, are comprehensively provided on its website.  Some other notable items are below:

Weather – While Denmark’s climate is generally temperate, with summertime boasting 17 hours of daily sunlight, the weather during the Roskilde Festival has been unpredictable in recent years, causing many guests to wait until weather reports before investing in tickets.  Be prepared for rain with parkas, wellies and tent flies, or intense heat–2009 ranked as Roskilde’s hottest year ever–which the swimming lake helps temper.

Hopenhagen Redux – As the Festival’s climate campaign, Green Footsteps gives the audience an opportunity to make sustainable life-choices both during and outside of the Festival.  Initiatives last year included petition-signing and creating “green” camping communities and a Sustainable Stage, an eco-friendly cafe and market, among other steps.  More information about the campaign can be found on the website, and further questions can be sent to greenfootsteps@roskilde-festival.dk.

Other Cultural Things to Do – The 1/8 and 1/4 matches of the 2010 World Cup will be broadcast on big screens during the Festival, and just as in previous years, Roskilde Cinema will show free films throughout the entire week.

Line-Up – One legendary word:  Prince.  And over 140 of the other acts are here.

Previous: I Will Love You Forever
Next: News: World Cup Captured on Canvas