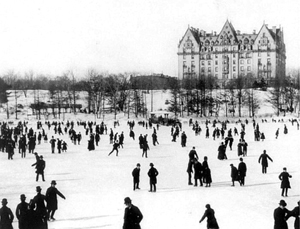 For residents of the Upper West Side, The Dakota apartment building is a spot of envy, sadness and iconic beauty. Built in 1884 by Edward Clark, the building was originally called “Clark’s Folly” because of its remote location, at the time. But by offering many modern amenities that lower Manhattan townhouses did not offer such as electricity, indoor plumbing, elevators and serviced rooms for guests, Clark’s apartments soon grew in fame and popularity. Before the building was even completed, all the apartments were rented and the golden age of the New York apartment was ushered in. The Dakota became the first in a series of many luxury apartment buildings built in New York and served as a model to its successors.

Since 1884, many celebrities have called The Dakota home including Boris Karloff, Leonard Bernstein, Lauren Bacall, Rudolf Nureyev, Roberta Flack, Rosemary Clooney, Jason Robards, José Ferrer and most famously, Yoko Ono and John Lennon. It is at The Dakota where John Lennon was assassinated on December 8th, 1980. Across Central Park West, directly from The Dakota, in Central Park is a memorial to the Beatle, a mosaic called Strawberry Fields. In 1967, the horror film Rosemary’s Baby was filmed at The Dakota but some residents claim to have witnessed their own horror stories at the building as it is said that the ghost of a little girl and founder Edward Clark roam the halls.