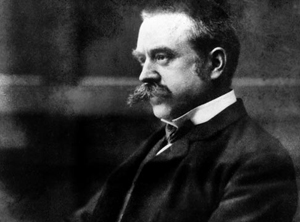 Stepping into a Stanford White building in New York feels like stepping into history. One has to only walk under the Washington Square Arch he designed in 1892 or into his glittering and gilded Metropolitan Club to feel in awe of an architect who during his day, built many of the city’s most important structures and whose life was a constant source of speculation and gossip.

One the greatest structures White ever created though wasn’t a public space but rather his own home on Gramercy Park- and he didn’t even build it. The White brownstone was originally built in 1850 but when White moved in in 1898, he proceeded to recreate it into a palace, filled with sumptuous interiors that included red velvet walls, huge columns and tremendous fireplaces. Here he entertained prospective guests, and even occasionally his wife, and used his home as a showroom for his work.

Sadly, all we have left of the house are a few black and white photos; it was torn down in the 1920s to create The Gramercy Park Hotel (which in its current incarnation is operated by former Club 54 owner, Ian Schrager and staffed with out of work models).