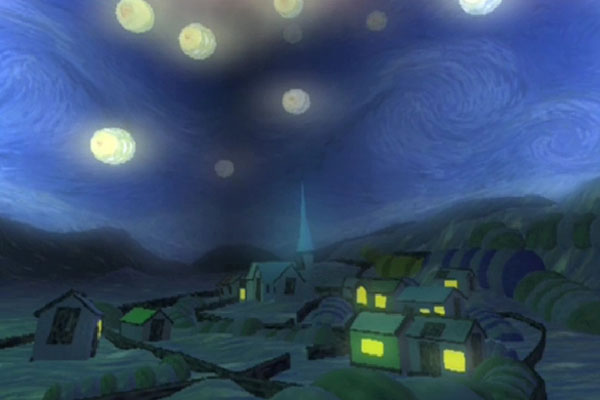 “Second Life?”, we hear you asking. “Isn’t that what nerds used to do instead of leaving the house in the mid-2000s?” Well, you’d be right about that. But despite a serious slide in usage and subscriptions, Second Life is still out there, still filled with users looking to create otherworldly experiences for gamers to explore. One of the best examples of art meeting the virtual world of gaming we’ve ever seen is actually an environment in Second Life based on Vincent Van Gogh’s famous masterpiece “Starry Night” created back in the virtual world’s heyday of 2007. Painted during one of Van Gogh’s more vulnerable periods in Saint Rémy, the famously hallucinogenic work has captured the imagination of so many for so long, it is actually surprising no one has tried mapping a digital 3D version of it before. Now, frankly, we don’t have a Second Life account—we tend to get our jollies in what we guess you could call “First Life”—but Second Life architect Robbie Dingo’s video of his creation (below) is truly mesmerizing and a rare chance to see a famous work of oil and canvas made into something new and stirring. Also, big props for using Don McClean’s “Vincent” as a backing track. [BoingBoing]


Or you can see it for yourself–“First Life” style–with a trip to the Provinçal town of Saint-Rémy that inspired the artist. For tips on where to stay and what to do, just pick up a copy of our “Art + Travel Europe: Step into the Lives of Five Famous Painters” today.
saint remy second life starry night technology Van Gogh video 2010-03-31
Gabriel

Previous: The Only Footage of A NYC Musical Landmark: A Two-Minute Tour of Max’s Kanas City
Next: Liverpool Celebrates Its Musical Heritage With Lennon Festival