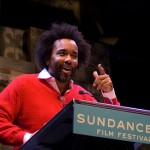 The Sundance Film Festival may just be the best part of winter. Every January the international film community heads to Park City Utah for 10 days of screenings, swag and schmoozing. But this year the festival promises to get back to its roots with a season of “renewed rebellion.” While we can’t vouch for that yet, the festival announced its ... END_OF_DOCUMENT_TOKEN_TO_BE_REPLACED