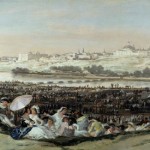 The fight to save the hill depicted in Francisco de Goya’s painting La Pradera de San Isidro is on in Madrid. The hill known as San Francisco cornisa is a green ridge from which Goya painted the Madrid skyline, depicted in the painting, as seen in 1788.   Last year, Madrid’s city hall granted the Catholic Church permission to build ... END_OF_DOCUMENT_TOKEN_TO_BE_REPLACED