Museyon Live: One Night Only 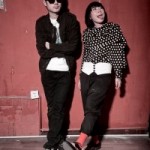 Tonight Museyon celebrates the launch of Music+Travel Worldwide with two of our friends from Beijing. Here’s a sneak peek at what to expect from Xiao He and Jeff Zhang Shouwang.   Since the late ’90s, Xiao He has been a pioneering force in the Beijing underground first as a member of the experimental rock band Glorious Pharmacy. Today he mostly ... END_OF_DOCUMENT_TOKEN_TO_BE_REPLACED