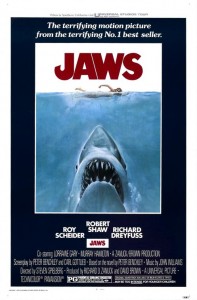 It’s that time of year again — Shark Week — arguably the most exciting annual event on television that doesn’t involve sports or singing competitions.

Sharks on the big screen have always captivated audiences. The most famous of the shark-slasher flicks is, without a doubt, Steven Spielberg’s ‘Jaws’. And even 30 years later, that soundtrack is synonymous with a shark attack. (Duh dun. Chilling, right?)

Well, anyone who’s ever been to Universal Studios in Florida can tell you exactly where Bruce, the mechanical shark who starred in the film, is today. But those wanting to test the film’s shark-infested waters for themselves, should head to New England instead.

The film takes place in the New England town of Amity, a fictional resort played by scenic Martha’s Vineyard, Massachusetts. If you visit, don’t worry about finding your own Great White. Underwater footage of real sharks used in the film was actually shot halfway around the world from New England — off the coast of Australia — with a dwarf actor to make the sharks look even bigger. So really, you won’t need a bigger boat.

Previous: Rhode Trip
Next: Calling All Sex and the Citizens