News: Van Gogh Gets an Update 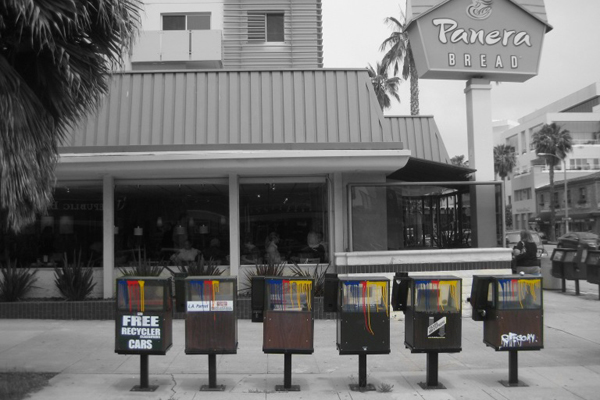 Paper Magazine writer Peter Davis recently noticed on his “street art safaris” around New York and L.A., a new artist had entered the scene with simple, beautiful, three color, drip paintings on walls and newspaper boxes. After some digging, Davis discovered these abstract works to be by actor, painter and filmmaker Greg Siff. Siff is creating the works to create viral buzz for his new film entitled painT, which is currently is currently in pre-production.

painT will be a contemporary retelling of the life of Vincent van Gogh with the main character of ‘Vinny’ played by Siff himself. Siff explains the film as:

“what if Vincent van Gogh was born today? painT tells the story of Vinny, a struggling artist and quintessential “art underdog” who sees the world as a living, breathing painting. Set against the backdrop of the New York & L.A. art scene, painT is an American update on the tragic life of van Gogh, seen through the eyes of his modern day counterpart and spiritual heir, examining the fine line between love, madness, and paint.”

According to a new survey in this week’s Herald Scotland, more than a quarter of children under the age of 11 do not know who Vincent van Gogh is while 10% believe is a ‘footballer.’ Perhaps van Gogh is in need of an updating in order to distinguish him from David Beckham.
greg siff news paint vincent van gogh 2010-08-11
Kellas