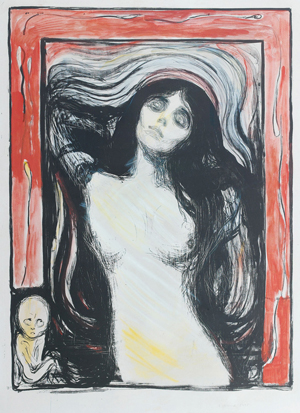 It has been revealed that Tuesday at Bonham’s Auction House in London, a print of Munch’s controversial ‘Madonna’ from 1895 sold at auction for a record breaking $1.91 million, while estimates were in the $1 million range. The print is thought to be the first hand painted version of the image, which features Munch’s mistress Dagny Juel posing as the Madonna with a small fetus in the lower, left hand corner.

Bonhams Head of Prints, Robert Kennan said, “It has been a real privilege selling such a wonderful image and it fully deserves to have achieved such a fantastic price.” The print is in excellent condition and has been held in the same family for 100 years.
bonhams munch news 2010-07-15
Kellas