It’s time to check in with Alexandra Ivanoff, our guide to Istanbul’s thriving classical music scene. Not only is Alexandra an accomplished performer in opera, musical theater, film and jazz with degrees from the Eastman School of Music and Yale University, she’s also a contributor to major mags like Time Out Istanbul and Andante. As if that weren’t enough, she’s also working on her first book, “Back to the Old World: An American Woman of a Certain Age Opts Out of the New World.” We caught up with this multitasking mezzo-soprano to find out more about the scene in Istanbul.


MG: You’re working on a book now, ‘Back to the Old World.’ What’s it all about?
AI: My DNA has pulled me back in time; I knew I was meant to live in an ancient village surrounded by grape vines and not in the middle of the cement canyons of a modern megalopolis. So I left America’s futuristic fold in favor of the crumbling byways of Byzantium. This book chronicles my amusing exploits as I cross cultures, reinvent myself, and of course, relish in a banquet of Turkish men of all ages.

MG: After studying in the U.S., how did you end up in Turkey?
AI: Turkey offers me interesting opportunities to write professionally about music and other subjects.

MG: How would you describe the Turkish sound?
AI: Lots of davul (hand-beaten drum), baglama (long-necked guitar), ney (wooden vertical flute), and tricky rhythms that are not divisible by two.


MG:What makes Istanbul such a cultural hotspot?
AI: Other than the warmth of the Mediterranean climate, Istanbul’s nightlife compares favorably to New York City: 24-7 music and dancing, food and fun, and awesome sights.

MG: What’s your idea of one perfect night out in Istanbul?
AI: A concert, a late dinner on a rooftop terrace overlooking the Bosphorus, and walk along the water’s edge under the full moon. 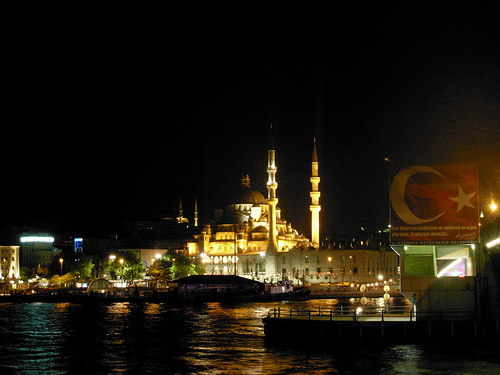 Night Over the Bosphorus

MG: Any dos and don’t for people visiting Istanbul, or Turkey in general?
AI: Do research about cultural customs and don’t expect things to function like your own country.

MG: How do you discover new music?
AI: www.istanbul.net.tr

MG: For people just getting into classical where should they begin (songs, artists…)?
AI: A Beethoven Symphony (there are 9), Vivaldi’s “Four Seasons”; anything by Handel; a piano solo by Rachmaninoff.

Previous: Tribeca in Doha
Next: All Aboard the Orient Express