Started in 1410, St. Andrews is the oldest University in Scotland and the third oldest in the English speaking world. The main part of the city only extends over four streets but since its history reaches as far back as the 8th century, there is a wealth to see packed into the small area.

One oft-overlooked section of St. Andrews is the North Haugh, located across from the Old Course, about a mile from the city center. On the North Haugh sits an unlikely building for St. Andrews, the residence Andrew Melville Hall and one of the finest examples of New Brutalism architecture in Scotland. The University of St. Andrews commissioned the student resident building to architect James Stirling in 1963 and construction began in 1967 and took about one year. James Stirling was born the son of a ship engineer in 1926 in Glasgow, Scotland but when he was a little boy, his family moved to the port city of Liverpool. This heavy nautical influence on the budding architect’s life manifests itself in the somewhat shocking architecture that is Andrew Melville Hall.

Last summer, Hollywood came to The Haugh and took over Andrew Melville Hall for the day, turning it into a hospital in a new adaptation of Kazuo Ishiguro’s novel, Never Let Me Go starring Keira Knightly. Never Let Me Go takes place in an alternative future where humans are cloned for organ farming. Its main character soon comes to realize that she is one of those clones. 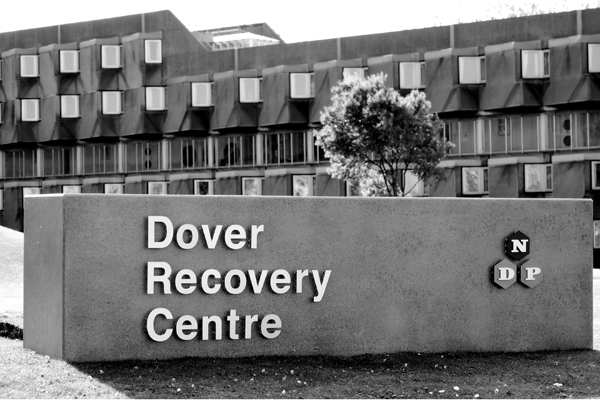 At first glance, the Andrew Melville hall seems to be nothing out of the ordinary but upon closer inspection, one slowly comes to realize that this gray, concrete structure rising out of the grass with its giant forecastles and deck railings seems better suited for the sea than the land, like a futuristic battleship. It is no wonder that they would choose to film a story of a dystopian future here. St. Andrews lore tells of Stirling designing the hall to resemble two ships crashing into one another, a more pleasant version of the story states that they are merely passing in the night. Both tales are false. The building is actually meant to symbolize two ships docked in a harbor, which fits perfectly with the landscape since it is built perpendicular from a former sea cliff.

Andrew Melville Hall is classified as New Brutalism architecture (a label Stirling is said to have shied away from seeing as bed for business) whose definition is often marked with a focus on technological innovation. Melville is no exception to this. Some of the new technology that Stirling used was a soundproofing of all the rooms and underfloor heating that was meant not only to radiate warmth but also to capture and store it. Unfortunately both of these new technologies failed in their purposes. Brutalism is often characterized by what seems to be the need to express some architectural ideal that comes before the needs of the people who are to occupy the buildings. Stirling makes it clear while writing about Andrew Melville in his RIBA drawings book that his express purpose in the choices he makes is for the benefit of the students. For example, creating dank corridors to force the students out into the communal areas where they can socialize and facing all the windows towards the sea and the mountains so they all might have a wonderful view. Therein lies the difference between Brutalism and New Brutalism, where Brutalism is the expression of an architectural ideal; New Brutalism adds a functional approach towards this architectural design. Stirling states that, “…these buildings have extraordinary circumstances which made considerations of structure top of the importance hierarchy.” and that Andrew Melville is an “…external appearance of expressed structure.” 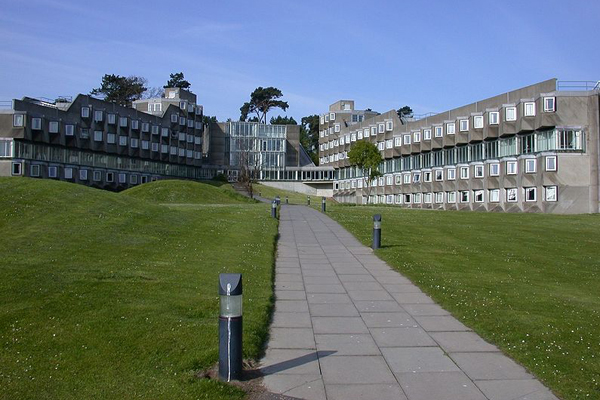 Andrew Melville Hall is rated number 12 out the 100 greatest Scottish buildings of the past 50 years and is well worth the walk out from town. We suggest grabbing a drink afterward at the Old Course pub called The Jigger Inn across the way for a little contrasting old world Scottish charm. And if you happen to be there during one of the Old Course’s tournaments, such as the celebrity tournament Dunhill Links (Oct 7-10, 2010), you never know whom you may run into.